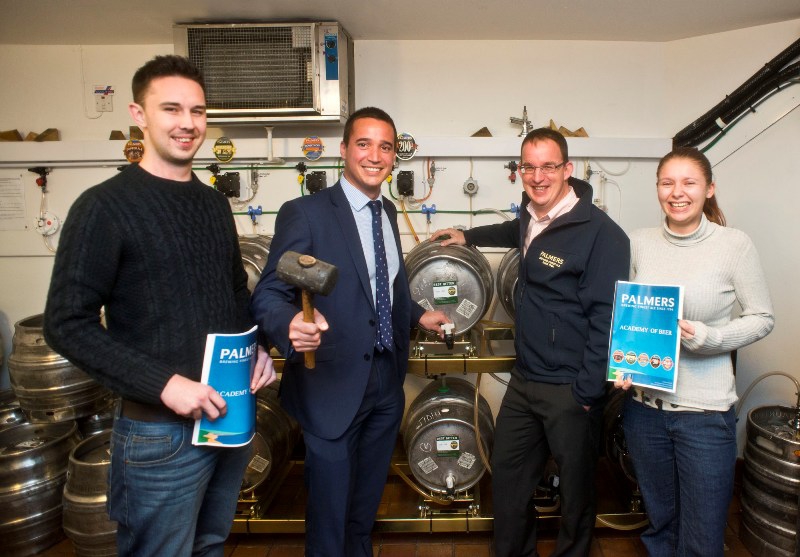 Palmers Brewery have set up an Academy of Beer to give pub tenants and their teams masterclasses in preparing and serving fine ale in tip-top condition.

The Academy was launched at The George Hotel in West Bay with a half-day training course for licensees and key pub staff in the Bridport area, from Chideock to Litton Cheney.

Six sessions a year are to be held at different Palmers’ pubs across Dorset, Devon and Somerset, to ensure that all areas are covered.

Jayson Perfect, Palmers’ tenanted trade director, who worked previously as a barman, cellarman and landlord, said: “We were going to run the Academy in the brewery itself but then we thought, this is a course for people who work in pubs, so let’s take them to a working cellar and let’s talk about the entire process from the production of the beer to how it reaches the customers’ lips.

“What I want to achieve is the customers’ expectation of having a perfect pint – excuse the pun – every time.”

Head Brewer Darren Batten said: “We’ve invested a significant amount of money over the last 10 to 15 years on our cellars and the way we dispense cask ales. Every one of our 55 pubs is accredited with Cask Marque and this is a way of taking that work with licensees even further. It’s putting the message out to other key pub staff and their teams.

“It’s all about our passion as a brewer, about our licensees being proud of the products they sell, and about our customers being very discerning.”

Palmers Brewery has also launched a best cellar competition, with pubs being meticulously inspected three times a year. Many are scoring more than 90%, and Academy of Beer courses are designed to drive the numbers even higher.

Christophe Dupuy, who took over last month as landlord at The George Hotel in West Bay and also runs The Greyhound in Beaminster, said: “We’re very proud to host the first Academy Of Beer and I think it’s a fantastic way of doing it, in a live environment. It’s been very informative, and I think it’s good for the industry.”

Jamie Smith, bar manager at The George Inn in Chideock, said: “It’s been very easy to take in and very beneficial all round really. I’ll definitely go away and feed things back to other staff so there’s common knowledge between us and everything always runs as it should.”

Victoria Winstanley, who works at The West Bay Hotel as a barmaid and waitress, was born in a pub. Her father worked as a landlord for decades, The George Hotel in Bridport being one of his hostelries.

Victoria said: “I started as a pot washer, then I came out front and that’s where I’ve stayed. Pubs are what I do, they’re what I’ve always done, but I’ve learned things today and I’ve really enjoyed it. It’s been very interesting.”