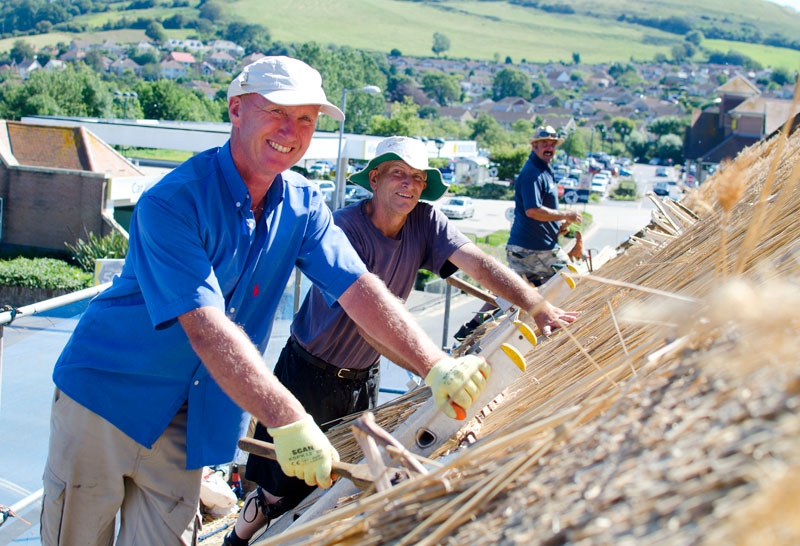 The UK’s only thatched brewery – Palmers Brewery in Dorset – is being re-thatched.

Nearly 2,000 fresh bundles of water reed are being fixed to the northern section of The Old Brewery in Bridport for the first time since 1977, by a team including two of the same thatchers.

Ian Hobday and Kevin Trott are both proud and pleased to be up on Palmers’ roof again, 35 years later.

Ian, who lives in Cattistock and runs Ian Hobday Thatching, which looks after all of Palmers’ thatch, said: ‘We are proud that our original work lasted so well, and it is nice to think you’ve got a connection with a building and you can keep coming back.

‘The brewery is a unique building and it has brought back memories.’

In 1977, Ian and Kevin were both teenagers, and they recall being given a daily allowance of two free bottles of Palmers lemonade. They could have had two free pints of beer, but felt safer working high up in the air with lemonade.

‘Palmers’ lemonade is lovely,’ said Kevin. ‘We really used to look forward to having a bottle. It used to be one of the highlights of our day!’

Back then, Ian and Kevin were still learning their trade under West Dorset master thatcher Guy Gale, who died in 2009.

‘It’s different,’ said Kevin. ‘Then, we had Guy to shout at us if we didn’t do it right, now we’ve got to think for ourselves!’

Ian added: ‘He’s probably looking down on us now saying, you should have done it this way, not that way. And what’s those new tools you’ve got?’

Working alongside Ian and Kevin this summer are Ian Gay, from Skilling in Bridport, and John Bretherton from North Eggardon near Powerstock. Between them, the four have around 130 years’ experience of thatching.

They are using a few new tools, such as stainless steel fixings instead of long nails known as crooks, but otherwise the thatching is being done much as it always has been since The Old Brewery was built in 1794-1796.

John Palmer, chairman of Palmers Brewery, said: ‘Thatch is solid and traditional and it does have charm.

‘It was a question on Mastermind many years ago – where is Britain’s only thatched brewery? – and the person got it right, which was rather pleasing.

‘I think the Brewery fits in with the culture of what makes Bridport a special place.’

Ian Gay can see the roof of Palmers Brewery from his home. It’s a building he’s always wanted to work on.

He joked: ‘I can leave home at 8 o’clock and get here at 8 o’clock! It’s very good, very nice. And if I can drive by in 30 years time and still think – that looks alright – then I’ve done what I should do, my job’s done, I’ve fulfilled it – and I’ll be happy.’

Re-thatching should be finished by mid-August, depending on the weather. When the job is done, all four thatchers plan to celebrate with a pint of Palmers’ finest ale – and maybe, just for old times’ sake, a glass of lemonade as well.