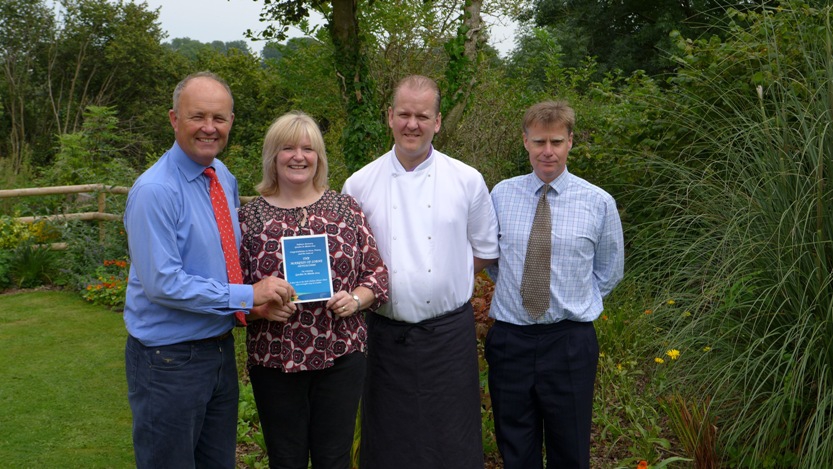 Steve & Trace Brady, licensees of The The Marquis of Lorne at Nettlecombe show they can make their garden work for their business, crowned winners of Garden in Bloom 2014.

During the summer of 2014 Palmers Licensees were given the opportunity to compete with each other to demonstrate that they could maximise the potential of their outdoor areas. Judges Cleeves Palmer, Palmers Sales & Marketing Director and Tom Hutchings, Palmers Tenanted Trade Manager visited sites during August, to see how the competing pubs had used their gardens to generate trade and entice new customers.

“The competition was very close,” said Cleeves Palmer “we were obviously interested in the overall presentation of the premises that entered but more importantly we wanted to learn how licensees had used the outside of their pubs to promote and grow their business’ over the summer.“Trace & Steve excelled in every area of the competition, the garden looks fantastic especially surrounded with Dorset fencing. They have obviously invested a lot of time and money, with a new play area, mini woodland walk and horse hitching post!”“The pub grows a wide variety of salad and vegetables which is used and promoted on the kitchen’s menu and throughout the year they run outdoor events. All this is advertised on the pub’s website and social media. During the summer months the garden can increase turnover by 50%.”

Landlords Steve & Emma Smith of The George Inn at Chideock were awarded the position of Runner Up. The judges were impressed by the overall appearance of the pub but more importantly by the incredible volume of trade that they have created by realising the full potential of their relatively small patio area.

“Steve & Emma are a great example of what can be done with a small, low maintenance area”, said Tom Hutchings, “they continue to work incredibly hard with regular events and lots of promotional effort which is reflected in the volume of trade that The George generates.

“Thursday’s Wood-Fired Pizza Nights have become something of a local institution and the World Garlic Eating Competition attracts national attention.

“We are really excited to see how Steve & Emma go about developing the rest of their outside area over the coming winter,” added Tom, “creating additional external dining space and increasing their own produce. We are looking forward to The George’s entry next year to see what changes they introduce.”

Alan Campbell, licensee of The Lord Nelson, received a special mention from the judges for the transformation he has made to the premises by creating an attractive 20 cover courtyard area that previously never existed and which has all but doubled his turnover over the summer months.

Jayson Perfect, Palmers Tenanted Trade Director commented “We were very impressed by the standard of entrants and I am delighted that the three front runners are such different pubs with very different outside areas. West Dorset is blessed with thousands of visitors each year and our licensees have to keep being innovative in what they offer and how they promote it if they want to attract this trade. The Garden in Bloom competition demonstrates how important the external area of any pub is and that with time and dedication it can generate significant extra trade.”