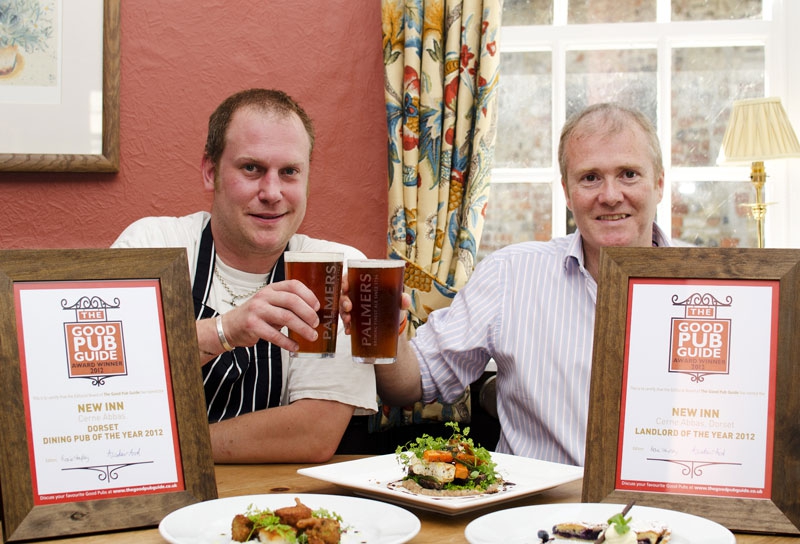 The New Inn at Cerne Abbas, owned by Palmers Brewery, has been acclaimed Dorset Dining Pub of the Year – just days before it’s closed for six months for renovation.

Landlord Jeremy Lee was also judged national Landlord of the Year. He said he was ‘very excited’ to win both awards from the Good Pub Guide 2012.

He admitted: ‘It’s not great timing, as we’re shut from October 10. We had no idea we were going to get these awards. We’ll lose some short-term trade, definitely, but in the longer term it’s a nice bonus.

‘We’ll be able to reopen with these awards under our belt, as recognition of what we’ve done for the last two years.’

Palmers is making a substantial investment in the pub, which will reopen by May 1 next year with 11 bedrooms instead of six, more space for eating and drinking, a new kitchen and new loos. It’s one of the biggest single refurbishment projects ever undertaken by the Bridport brewery.

Mr Lee said: ‘I can’t sing Palmers’ praises highly enough, they’ve supported me every step of the way, they couldn’t have treated me better. They’ve been fabulous, they really have.’

He went on: ‘The pub will look different and it will be more comfortable, but in terms of what you get on a daily basis, it won’t change one jot.

‘We tailor to what the market is. We always run a bar menu, fish and chips, sausage and mash, corned beef hash, pie of the day, all quite reasonably priced, and then there’s another menu which is more expensive and more involved. Lyme Bay scallops with ham hock croquette and cauliflower puree as a starter for example.

‘We’ve embraced the countryside, the traditional country pub dishes, but we’ve given a modern spin to the food, a more contemporary feel.’

Mr Lee, 42, used to own five pubs in London. He was also a Michelin inspector and a consultant to several 5* international hotel chains.

Mr Lee said: ‘Dan is an incredibly dedicated, talented, hardworking individual with a total passion for what he does and he’s also trained up a team pretty much from scratch.’

Mr Brinklow said: ‘I was a bit shellshocked by the award, really. Neither of us realised that anyone had even been to see us, so I didn’t believe it; I thought Jerry was winding me up to begin with. Now I’m very pleased. I think it will make a massive difference for us next year.’

He has enjoyed cooking locally. ‘Dorset is unbelievable for produce. The flavour’s all there and it’s beautiful stuff to use.’

Dan’s team in the kitchen includes Neal Chainey, who joined as an apprentice straight from school in Dorchester. And Stefon Wade, from Weymouth.

The New Inn now has a total of nine staff. Mr Lee said: ‘Without the team the awards wouldn’t have come.’

He concluded: ‘I think a pub should be a hostelry, a place of comfort, hospitality and a bit of respite. That’s what pubs were traditionally and that’s what they should be.’