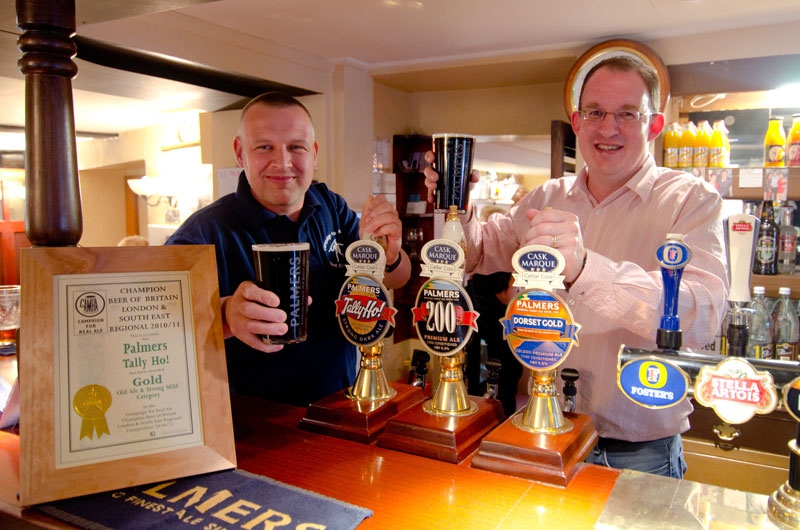 Tally Ho! is the toast of Palmers Brewery. It has won the title of champion beer in a Campaign for Real Ale (CAMRA) contest.

Richard Gabe, brewery liaison officer for West Dorset CAMRA, said: ‘The beer won on its own merits in a blind tasting by a panel of judges. Tally Ho! is a strong old ale that is extremely popular locally and at beer festivals. It has a taste of roast malts and treacle toffee, giving a long nutty/coffee finish. It is highly commendable, in this age of micro breweries, that a traditional family run brewery with a tied estate can win this prestigious award.’

Head Brewer at Palmers Brewery in Bridport, Dorset, Darren Batten, was delighted to accept the award. He did this at his local Palmers’ pub, the Three Horseshoes in Burton Bradstock. Darren used to work here behind the bar as a teenager, before going on to study biology and gain his Brewers’ Diploma.

He said: ‘This is wonderful news. A lot of breweries will brew beers especially for festivals, but ours is a commercial product that has to stay consistent. It’s therefore great that our traditional beer has been recognised.’

It’s the latest accolade for Tally Ho!.  It was picked as Beer of the Festival, in the Old Ale/Strong Mild category, at the CAMRA Woking competition, in February.

Darren added: ‘Tally Ho! is probably our most famous beer. It has got a strong local following and we’re thrilled that it’s getting recognition from real ale aficionados further afield.’

Tally Ho! is brewed with the finest Maris Otter malted barley, a large amount of English Golding hops and lots of crystal malt. Renowned as a strong, nutty, full strength dark beer (5.5% ABV). It has built a cult following since it was first brewed for bottles in 1949. The oaky and roasted flavour and deep and distinctive taste, makes a characterful cask-conditioned ale. It’s one of five fine real ales brewed by Palmers.