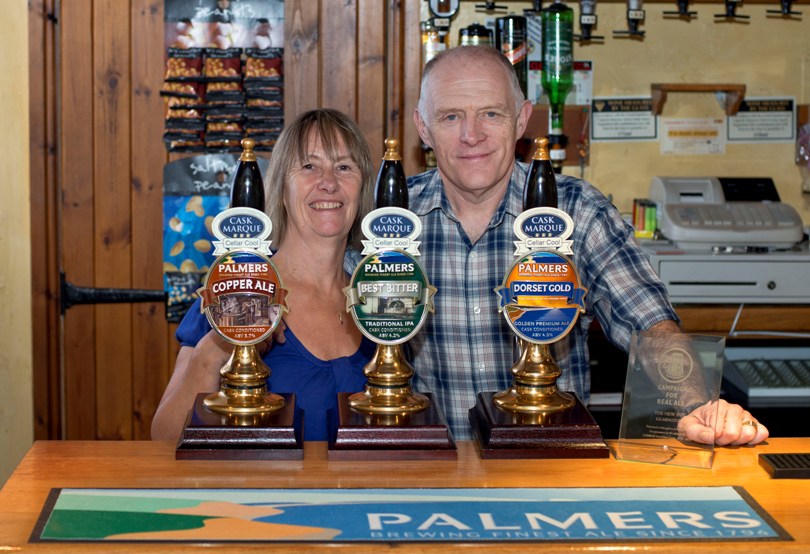 The landlords of a pub that’s been in every edition of CAMRA’s Good Beer Guide since 1974 are retiring.

The New Inn at Kilmington in East Devon is one of only seven pubs in Britain included by CAMRA in all 41 editions of its Good Beer Guide.

Brian Jenkins, 62, and his wife, Denise, 59, have run The New Inn for just over 21 years, as tenants of Palmers Brewery of Bridport in Dorset.

Brian and Denise’s success as one of CAMRA’s ‘Magnificent Seven’ is particularly impressive because the pub was destroyed by fire in 2004 and shut for nearly a year for rebuilding.

‘We only had what we stood up in and that was it, everything else was gone,’ said Brian.

‘It was devastating,’ said Denise. ‘It plays on my mind now when I start thinking about it.’

But Brian said the fire – caused by spontaneous combustion in the thatched roof – was also ‘a godsend’ as it enabled Palmers to bring the pub firmly into the 21st century, with new features like the ‘excellent toilets with disabled access’ praised by CAMRA in the current Good Beer Guide.

Other big changes over the last two decades have been the increased sales of wine and food. ‘Pubs can’t be without food these days,’ said Denise.

Brian added: ‘When we first came here, food was about 10% of the turnover, it’s now nearly 50%, and wine, I used to sell maybe a bottle a week, and I’m now doing thousands of bottles a year.’

But it’s Palmers’ fine ale that has given The New Inn its exceptional reputation for quality.

‘I’ve never felt it to be a burden of responsibility, it’s just something you do, things have to be right,’ said Brian, who served for 24 years with the forces and was a Regimental Sergeant Major.

‘It’s the military upbringing,’ he laughed. ‘If something’s got to be done, it’s done.’

His top tips? ‘Keep your beer lines clean, do them every week and do them properly, and make sure you’ve got the right-sized barrelage in for your turnover, it’s as simple as that. If you change a barrel every day, then your beer’s fresh every day.

‘Always have the right glass for the right beer, and make sure they’re clean.’

Palmers tenanted trade director Jayson Perfect said: ‘It’s a great honour to own one of the Magnificent Seven pubs. Brian and Denise have been fantastic tenants and I hope they enjoy a happy retirement. Our new landlords, Chris and Becky, are committed to keeping up the listing and making the pub even better in the future.’

After they retire in October, Brian and Denise are planning to enjoy a series of holidays around the UK and Europe. One of the reasons they chose to go in October, soon after the publication of the Good Beer Guide 2014, was to give their successors the benefit of being in the Guide, and the best possible chance of staying in there. CAMRA members will have months to satisfy themselves that standards are being kept up.

Denise and Brian will also be returning, after giving the new landlords chance to settle in.

‘We’ve got a house about a mile and a half away and this is going to be our local,’ said Denise.

‘She’ll be the chauffeur so I can get in a few beers,’ joked Brian.