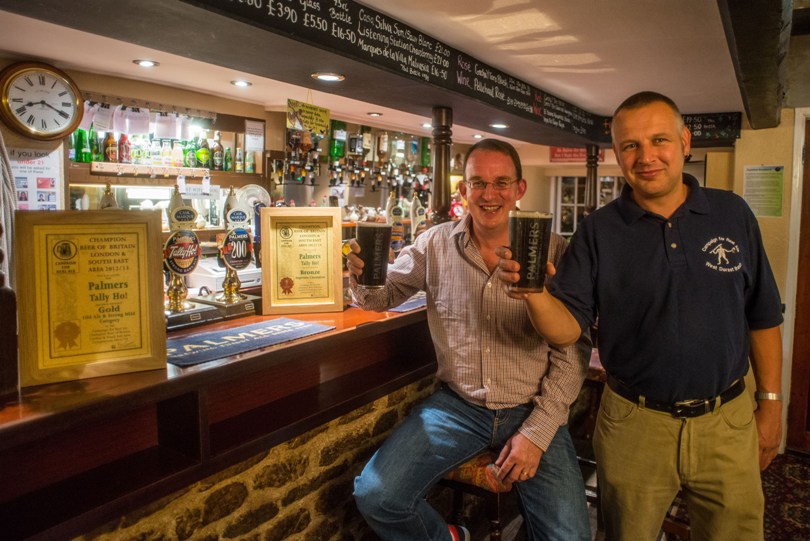 Palmers Brewery’s oldest and most historic fine ale, Tally Ho!, has won a brace of awards in the CAMRA Beer of Britain championships.

The strong beer won Gold in the Old Ale and Strong Mild category and Bronze in the Supreme Champion class for the London and South East region.

Richard Gabe from the West Dorset CAMRA branch presented the awards to Palmers’ Head Brewer Darren Batten and the two raised a celebratory toast in the Three Horseshoes in Burton Bradstock.

‘It’s very pleasing when you have so many new breweries and new beers being made that a traditional family brewer like Palmers with over 200 years of heritage can win such a prestigious award,’ said Richard.

Tally Ho! was blind tasted in a series of testing rounds against hundreds of other ales, to come top of the region in its category. First brewed in the 1940s, this dark ale has a loyal following among real ale connoisseurs for its distinctive rich, fruitcake flavour. At a strength of 5.5 ABV, it makes a warming autumn drink and is available on draught and in bottles.

Brewer Darren Batten said: ‘Tally Ho! is a real heritage ale made the traditional way as our grandfathers would have enjoyed it. These awards prove it’s more than holding its own against modern beers.’