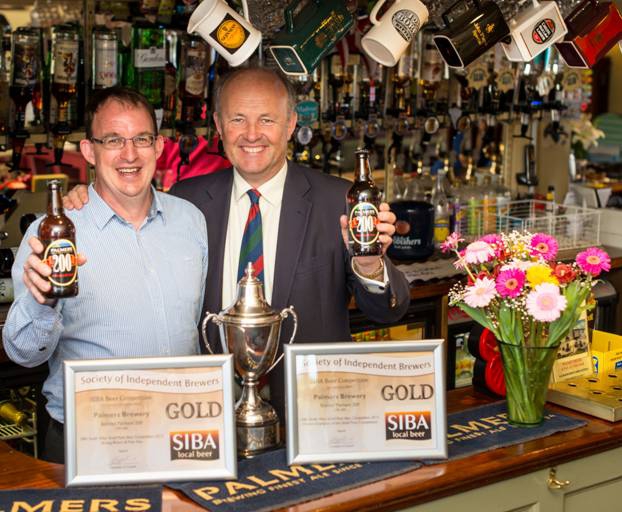 Palmers 200 beat more than 50 other beers to win a Silver award in the SIBA South West Region Beer Competition class for bottled bitters over 5%. The event, held in Newton Abbot, attracted 150 entries overall and is the highlight of the independent regional brewers’ calendar.

Palmers’ Head Brewer Darren Batten was thrilled that the Bridport brewery’s flagship ale won such a prestigious prize.‘We’ve been brewing Palmers 200 since 1994 and it’s still winning awards. Many breweries brew special ales just for the SIBA beer contest that aren’t generally available for sale, so it’s great that a traditional brewery like Palmers is recognised for one of its mainstay fine ales which is on sale all year round,’ he said.

Palmers 200 (5.0% ABV) is available on draught and in bottle and has been described by beer guru Roger Protz as ‘a finely balanced blend of malt, hops and quenching citric fruitiness.’

The ale was originally brewed to celebrate the bicentenary of the founding of Palmers Brewery in 1794. In that year Dorset rope and netting makers, the Gundry family, built a brewery on the banks of the River Brit in Bridport. In the late 19th century, two Palmer brothers – John Cleeves and Robert Henry – bought the operation and its pubs and gave it their names: JC & RH Palmer. Today, their great grandsons John and Cleeves Palmer work in the company and Palmers Brewery remains among the best of small independent brewers.

The original Old Brewery – famous as the only thatched brewery in Britain – is where the beer is still brewed to traditional methods with the finest ingredients. Palmers’ pubs include some of the best known and best loved in the South West.You can see how Palmers’ beer is brewed and taste the brewery’s five fine ales on a tour of Palmers historic brewery buildings, contact Palmers Wine Store on 01308 427500 for bookings or book online here.