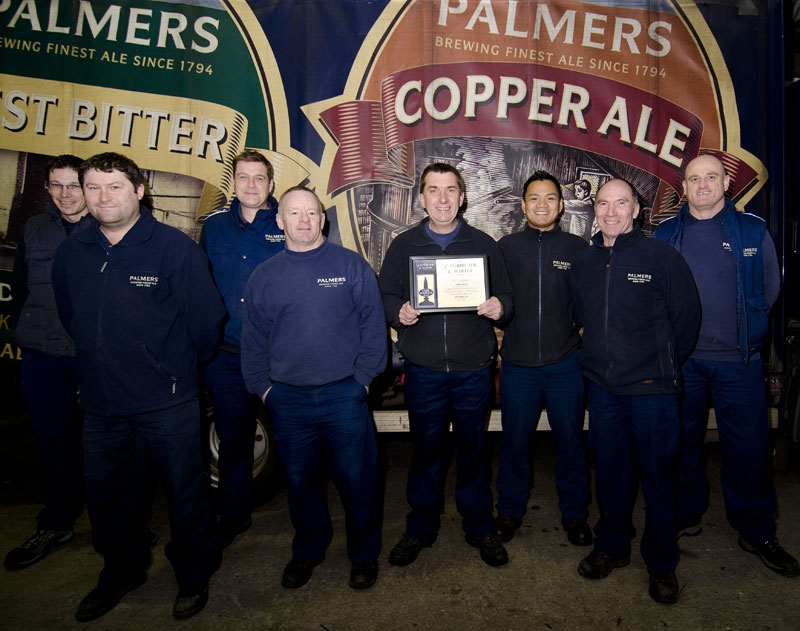 Palmers Brewery has become the UK’s first small brewery to achieve a new national standard for excellence in the distribution of real ale.

The award of Cask Marque’s Distributor Charter accredits Palmers’ skill in supplying beer to pubs and clubs in tip-top condition.

All Palmers’ 53 pubs already had Cask Marque awards for looking after and serving quality cask ale.

‘Real ale is a live product and there are lots of things which can change the quality of that product, if you’re not careful, so it’s terribly important to follow a strict regime and that’s what we’re about.

‘We take personal pride in properly handling cask-conditioned ale and we’re very pleased to be awarded the Charter. It cements the standards we expect of ourselves.’

Cask Marque awards are only made after independent inspections.

Paul Nunny, director of Cask Marque, said: ‘As cask beer is a living product it is important that it is kept in a temperature controlled environment, that sell-by dates are closely monitored and adhered to, and that a robust system is in place to monitor performance.

‘Palmers’ distribution delivered all these requirements and passed with flying colours.

‘The award of the Distributor Charter is the end of a journey by Palmers to deliver to their customers a great pint of beer in the glass.’

Mr Woodrow added: ‘You can’t – and as far as I can see – you never will be able to buy a pint of proper cask-conditioned beer in a supermarket.

‘The only place to buy a pint of quality real ale is a professionally run pub or club and long may that be the case!’

The award of the Distributor Charter caps a memorable few weeks for Palmers Brewery.

Last month, in the national Society of Independent Brewers Association awards, Palmers were runners-up in the contest for Overall Best Business, won Best Community Support and Best Individual Pump Clip, and were commended for a series of videos about people and brewing on the Palmers Brewery YouTube channel.

A new video shows Tim Joy and Barry Knight delivering casks from the Old Brewery in Bridport to three Palmers’ pubs in West Bay, The George, The Bridport Arms and The West Bay. Tim and Barry have both worked for Palmers for 10 years and like travelling over an area that extends from Brighton, London and Oxford over to Gloucester and down to Devon.

Here is the new video: