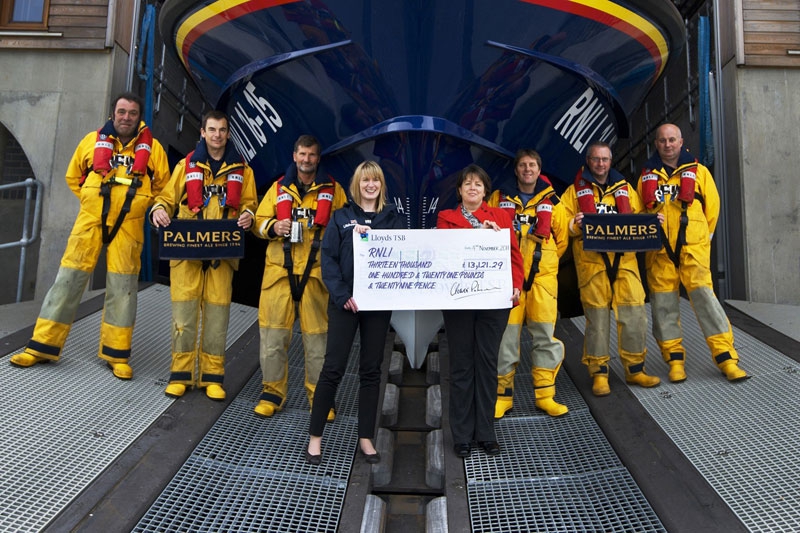 Volunteer lifeboat crew members at Shoreham RNLI lifeboat station were delighted to accept a cheque from a Dorset-based brewery which brings to an end four years of dedicated support for the charity.

Palmers Brewery, which has been brewing ales since 1794, handed over a cheque for more than £4,000 to the crew last week, bringing the total amount raised over the last four years to an impressive £13,121. That’s the equivalent of the cost of training 10 volunteer crew members pictured for a year and eleven pairs of yellow wellies.

Throughout the period of their support to help save lives at sea, Palmers have donated five pence from the sale of every pint of its popular Copper Ale to the RNLI lifeboat station at Shoreham Harbour. The £13,121.29 was generated by sales of the beer at a total of 11 pubs across Hampshire and West Sussex.

Cleeves Palmer, Sales and Marketing Director at Palmers Brewery, said he was delighted that the company has been able to raise so much for the charity that saves lives at sea: ‘There is a history of support for the RNLI in my family as my father, Tony Palmer, was the President of the Bridport branch from the 1970s until 1986.’

Palmers Brewery originally pledged their support for the charity in 2007, when their donations supported a £1M public appeal for funds to rebuild the lifeboat station in Shoreham Harbour. So when the time came for the brewery to present their donation, Sarah New, a free trade sales executive who promotes Palmers Copper Ale as well as a number of other Palmers ales, had no hesitation in paying a return visit to friends at the station.

Sarah said: ‘When we began supporting the Shoreham Lifeboat Station Appeal, Copper Ale was a relatively new beer, but its popularity has grown and grown. That station is now complete and fully open and operational, and we are pleased to have been able to continue to help save lives at sea through our support.’

Because their donation contributed to fund the new lifeboat station and its Tamar class lifeboat, Palmers’ support will help the RNLI for generations to come.

Helen Patrick, RNLI Corporate Partnerships Manager, said: ‘This is a fantastic amount – equivalent to the cost of training 10 volunteer crew members for a year with some to spare. We are so grateful to Palmers for their support over the last four years and want to say a huge “thank you” to everyone who has purchased a pint of Copper Ale across Hampshire and Sussex. You have all helped to make this possible.

‘By supporting Shoreham Harbour RNLI lifeboat station, its crew and the public appeal, Palmers and their customers have ensured that the four year partnership will help the RNLI save lives at sea for years to come.’