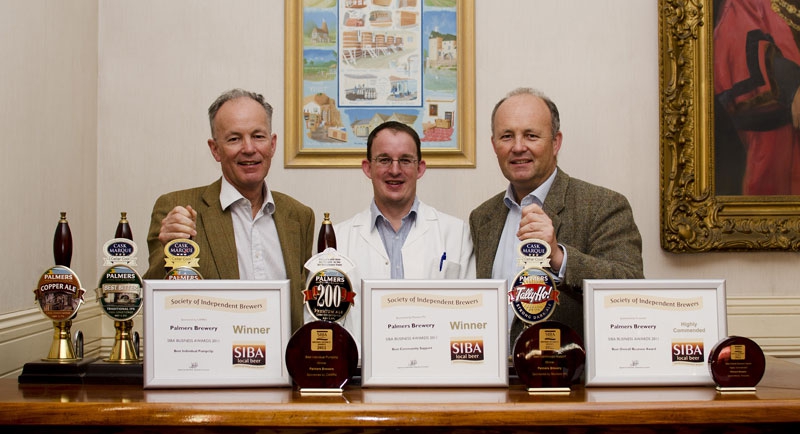 Darren Batten head brewer received the awards on behalf of Palmers at the Awards dinner in London on 14 November. This is the first time Palmers has entered the SIBA Awards, which are in their sixth year and are the industry’s most respected and prized awards for small and local independent brewers.

The SIBA judges said: ‘[Palmers is] good-beer focused, people-focused, community-focused – it’s a long time to have been flying the flag since 1794, but they do it, and long may they continue to do it.’

John Palmer said: ‘We are absolutely thrilled with the awards themselves and also the judges’ wonderful comments about our business, our beers and our community support. We are a family firm to the core and we set ourselves very high standards, and we’re immensely proud to have the industry’s recognition. We’re particularly pleased with the community support award. We thrive on our strong working partnerships with the local community, which supports us in turn and contributes to our success. These awards are testament to the hard work of our head brewer Darren Batten, every member of our dedicated brewery team and our pub landlords.’

Judges’ comments: ‘consistently excellent … richly deserved. It all adds up to community integration at its finest, and it sets a standard for other brewers, young and old, to seek to emulate.’

The judges were impressed by Palmers’ community support activities, including cash donations of £25,000 to charities such as the Dorset and Somerset Air Ambulance, the RNLI and the Chesil Trust over the last 12 months. Palmers have worked with Shipton Gorge villagers to re-open The New Inn as one of the first community pubs. The Bridport Gig Rowing Club has taken to water and stayed afloat thanks to two cash donations of £3,500. Palmers have also supported other local organisations, including Lyme Regis Football Club, Bridport FC, the Beaminster Festival and Bridport Food Festival. In 1986 Palmers donated land, worth more than £1m in today’s prices, to build the Bridport Leisure Centre.

Judges’ comments: A new design for a beer with a significant amount of heritage to be preserved, while fitting it in with a contemporary redesign of the entire range, presented a particular challenge.’

The Best Pump Clip award was awarded for the redesign of Palmers Tally Ho! clip. Tally Ho! is a strong, nutty ale which was first brewed in 1948 and has been a cult favourite ever since. In autumn 2008 Palmers redesigned their entire range of five pump clips, giving Tally Ho! a new look which celebrates its heritage. The design reworks a bold vintage gold sunburst and lettering from an original Tally Ho! clip from the 1950s.

Palmers was the single runner up in this category.

Judges’ comments: ‘a brewery that epitomises the ethics of local brewing, but has been doing that for much longer than the average SIBA member – by virtue of being such an old company! SIBA is immensely proud to have them as members.’.

Julian Grocock, SIBA chief executive, said: ‘To succeed, small brewers have to do so much more than just brew great beer: marketing, customer service, pack design and community support are all areas in which they have to become experts, and the winners and runners up today have more than risen to this challenge.’