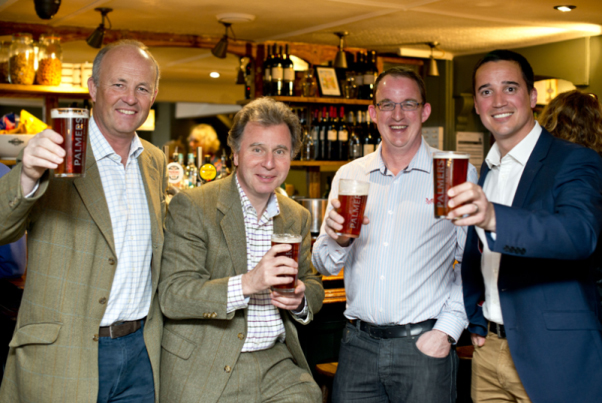 West Dorset MP and cabinet minister Oliver Letwin has been hailed as a ‘Beer Champion’ by Palmers Brewery in Bridport for helping to reduce the tax paid on beer.

Palmers acclaimed Dr Letwin for his support of beer drinkers, pubs and brewers. We invited him for a pint at their newly refurbished George Hotel in Bridport. The Government has cut the duty paid on beer by a penny a pint for two years in a row. It has also scrapped the Beer Duty Escalator, which automatically increased beer duty by two per cent above inflation every year between 2008 and 2012.

Cleeves Palmer, Sales and Marketing Director at Palmers Brewery, said: ‘I’m very, very pleased that beer duty has been cut and I hope it carries on. I’m glad the Government has finally understood that beer duty had gone up by far too much – 42 per cent in four years! We wanted to thank Oliver for his support.’

Dr Letwin said: ‘I’m glad that we’ve been able to do something for the pubs of West Dorset, which are an important part of the social life of the place.

‘As pubs begin to be places more and more where food and atmosphere are just as important as the drink, one wants to try to find a way of enabling people to invest and upgrade and that becomes easier if the duty is lower.’

Palmers have used the duty cut to help the tenants of all their 55 pubs. Jayson Perfect, Tenanted Trade Director at Palmers Brewery, said: ‘For the last three years we’ve held our beer prices for all of our tenants. No other brewery that I know of has done that, but we’ve taken a firm view that we want to support our tenants as much as possible. We also want to give them the option of making more money so that they can invest in their own businesses as well.

‘It’s all about investment. If you’re not spending money on duty and you’re a sensible company like Palmers, you can also invest in enhancing the quality of your pubs, making them a better place to drink, and ultimately selling more beer because more people want to go those pubs.

‘It’s a very exciting time for Palmers. We’ve got a special, limited edition new seasonal ale coming out for Easter and more people than ever are enjoying our pubs.’ In honouring Oliver Letwin as a ‘Beer Champion’, Palmers was acting in association with the British Beer & Pub Association, the Campaign for Real Ale and the Society of Independent Brewers. He was one of 100 ‘Beer Champion’ MPs who supported the reduction in beer duty.