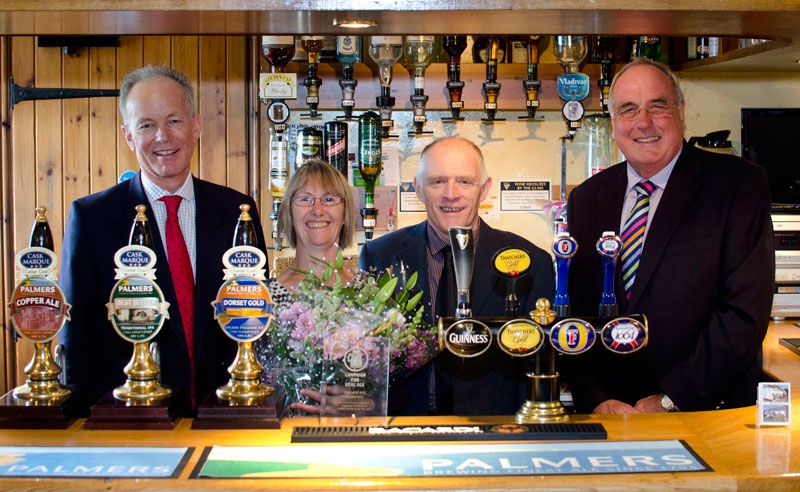 Devon landlords are rejoicing after The New Inn in Kilmington was included in CAMRA’s Good Beer Guide for the 40th year in succession.

It’s a double milestone for Brian and Denise Jenkins, who have also just notched up 20 years at the village pub in East Devon. The New Inn is one of only seven pubs in the country featured in every edition of the Good Beer Guide.

Born in the pub

Tim Woodrow, Tenanted Trade Director at Palmers Brewery, said: ‘We’re very proud that we’ve got one of those seven pubs nationally. Brian and Denise have certainly done their bit in maintaining that, with the excellent standards that they have. The place is immaculate. It’s always well-presented and they are model hosts. They’re made for the trade.’

Brian and Denise agreed to take on the pub without even setting foot inside.

Brian said: ‘We drove into the car park and she just said ‘That’s it’. We didn’t even get out of the car.’

Denise said: ‘It was just what we wanted – a thatched country pub with a large garden.

‘When we took over it was pretty quiet. but now we’ve got a lot of local support. We just try to be polite and nice to everybody, and keep everyone happy. It’s been really good, watching it grow.’

The New Inn burned down in February 2004 when the thatch spontaneously combusted. But it re-opened with improved facilities a year later.

John Palmer, chairman of Palmers Brewery, said: ‘Brian and Denise have been outstanding tenants for us, and that was exemplified by the way they recovered after the fire.’

Barman Brian Johns said: ‘They’re very nice people. They’re very hard-working and people like working for them. They’ve got it down to a fine art.’

Brian Jenkins added: ‘We are chuffed. We’ve only done 20 of the 40 years the pub has been in the Good Beer Guide, but we intend to keep it going and stay in there as long as possible.’