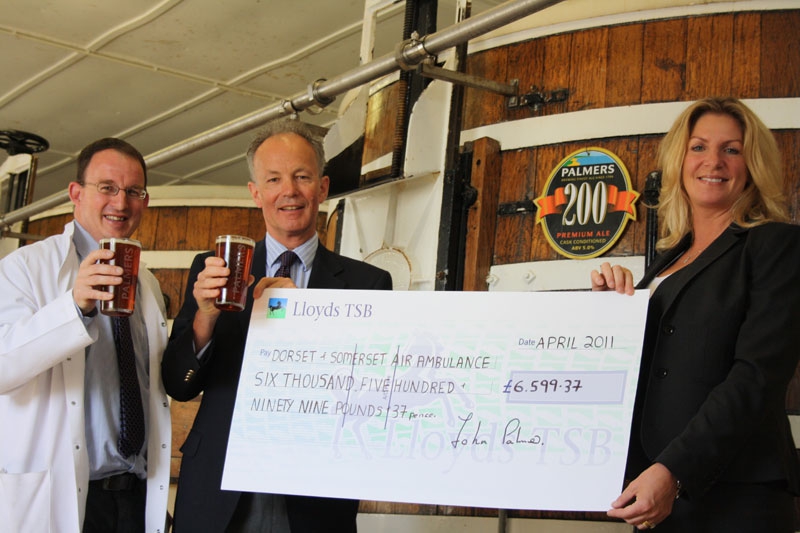 Sales of pints of Palmers premium ales have boosted the Dorset and Somerset Air Ambulance flying fund by more than £6,500.

The Bridport brewery donates 5p from the sale of Palmers 200 to the life-saving charity. This year, the amount raised is £6599.37. This brings the running total of Palmers’ support for the Air Ambulance to more than £20,000 over the past few years.

Air Ambulance representatives paid a flying visit to the brewery to collect their cheque. This was presented by Palmers’ Managing Director John Palmer, on Monday 9 May.

He said: ‘As a leading Dorset business, we have a responsibility to give back to the local area. The Dorset and Somerset Air Ambulance is a cause close to many people’s hearts. Any of us could have to call on it at any time.’

The Air Ambulance’s fundraising co-ordinator, Annette Plaistow-Trapaud, said: ‘On behalf of Dorset and Somerset Air Ambulance I would like to say ‘cheers’ to Palmers Brewery and all their pubs for supporting us. Thanks to their generous donation, and all the other people who help us, we can keep our helicopter flying and keep on saving lives.

‘We pride ourselves on having an outstanding air ambulance emergency service. This is only achieved through constant support from the public.  We receive no direct Government or National Lottery funding for our £1.4 million annual running costs.’

Palmers Brewery has long played an active role in supporting charities and initiatives. These are always one which are at the heart of the community. Every year they make substantial donations in money and in kind.

The Palmer family’s record of giving goes back many decades. In the 1970s they gave the land for the Bridport branch of the St John Ambulance.

In the 1980s Bridport Leisure Centre was originally funded by the sale of land Palmers gifted to the West Dorset Sports Trust.

More recently, they have helped young and disabled people enjoy the thrills of sailing through the Chesil Trust. They are proud to be the first major sponsor of the Bridport Gig Rowing Club. They also support Lyme Regis Football Team.