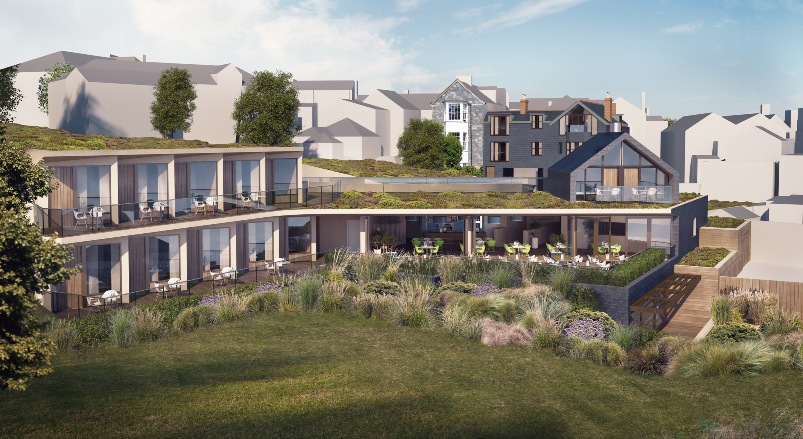 Palmers Brewery unveiled exciting proposals for the Three Cups building and surrounding site at a public consultation in Lyme Regis on Thursday 13 June. The consultation followed meetings with owners of the neighbouring properties and a presentation to Lyme Regis Town councillors.

The plans require the remodelling of part of the rear section of the former hotel in order to make the building structurally safe and provide the statutory access width for emergency vehicles.

Palmers’ property agent Nigel Jones, a director of Chesterton Humberts, said: ‘This is a unique site with unique considerations. Not least of these are extensive issues relating to the building structure, fabric and land stability. As noted in the structural reports by the consulting engineers and English Heritage’s engineers, while the front of the Three Cups building is largely sound, the rear of the building requires major structural work. That means the replacement of large portions that are structurally unsound and incapable of being refurbished or converted.
Any development will require suitable vehicular and pedestrian access to the rear, especially for emergency and service vehicles. This would mean demolishing some of the unsound rear section of the building to create a wider angled access.

This is a huge project with substantial costs involved. The rear part of the site has undergone extensive land stabilisation works that cover most of the rear land area. Any development of this site and of the existing building will therefore incur, what is normally termed in construction projects, significant ‘abnormal’ costs over and above the usual costs of construction. It is to Palmers credit that they are prepared to take the long view and invest the millions of pounds necessary to regenerate the site.’

This was the second consultation about the Three Cups that owners Palmers Brewery have held in the town. At the first, in September 2010, they presented several options for the site. For this second stage of the process, they based their plans on the option that received the most initial public support.

Palmers are inviting the public to view to comment on the latest proposals, before they make a planning application to West Dorset District Council this autumn.