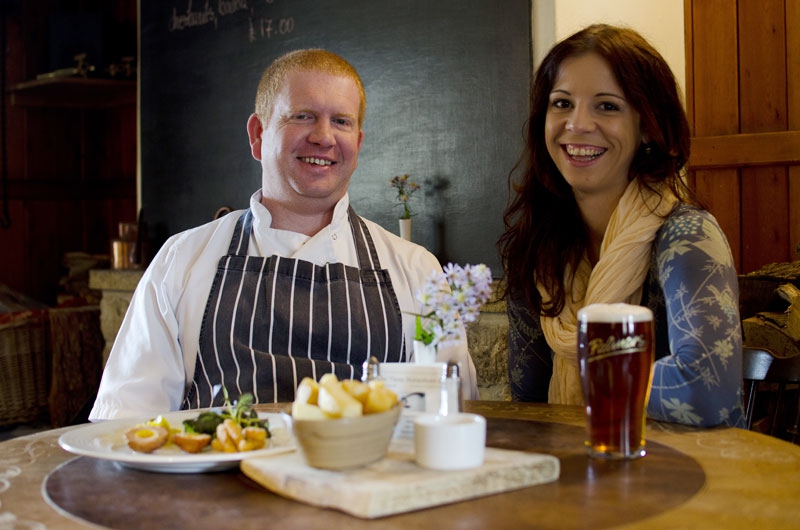 The Three Horseshoes at Powerstock has become probably the first pub ever to be praised by the Michelin Guide for its scotch eggs and burgers.

The Palmers Brewery pub near Bridport is a new entry in the 2012 edition of the international food bible.

Its citation reads: ‘It’s simply all about the food at the ’Shoes. They make their own breads, ice creams, chutneys and pickles. Try the wild boar Scotch egg or veal and bone marrow burger.’

The Guide was published on the same day that The Three Horseshoes won a Gold award from Taste of the West.

Landlord and chef Karl Bashford, 39, who took over the pub with his partner Susie two years ago. He said: ‘I’m chuffed as anything, chuffed to bits, we all are. I’ve never had such a big day.’

Susie said: ‘We’ve worked hard. But when you see people coming back, and people really happy, and when you get amazing surprises like the Gold award, it’s worth it.’

The Shoes’ wild boar Scotch egg is made with a quail’s egg. It’s served with a crispy pigs ear salad. The Dorset veal and bone marrow burger comes with triple-cooked chips and salad.

Karl and Susie grow their own fruit, vegetables and herbs and forage for things like wood sorrel and cobnuts. The pub’s menu changes slightly every day. This makes the best use of seasonal and local produce and bring out flavour.

Karl grew up in Croydon and worked in factories and on building sites before finding his vocation in food and drink. He has cooked at his mother’s pub in Wiltshire, Bristol City Football Club, The Flask in Hampstead. Here locals included Noel Gallagher and Russell Brand, and Gordon Ramsay’s Boxwood Café.

He said: ‘It was a bit of a culture shock, to be honest, coming out to the Dorset countryside. But now I just love the whole shebang. It’s a pretty area, we’ve got a nice local trade. The people that come out to us want to try food and experience a good pub atmosphere. It’s great.’

Susie and Karl said they chose to run a pub and become tenants of Palmers Brewery because it was friendly, personal and supportive. ‘Whenever we need them, they are there,’ said Susie.

The New Inn at Stoke Abbott also got a Gold award from Taste of the West, while The George at Chideock got a Silver. The New Inn at Cerne Abbas is also included in the Michelin Guide 2012. However, the New Inn is currently closed for renovation. It is due to reopen by 1 May, 2012.