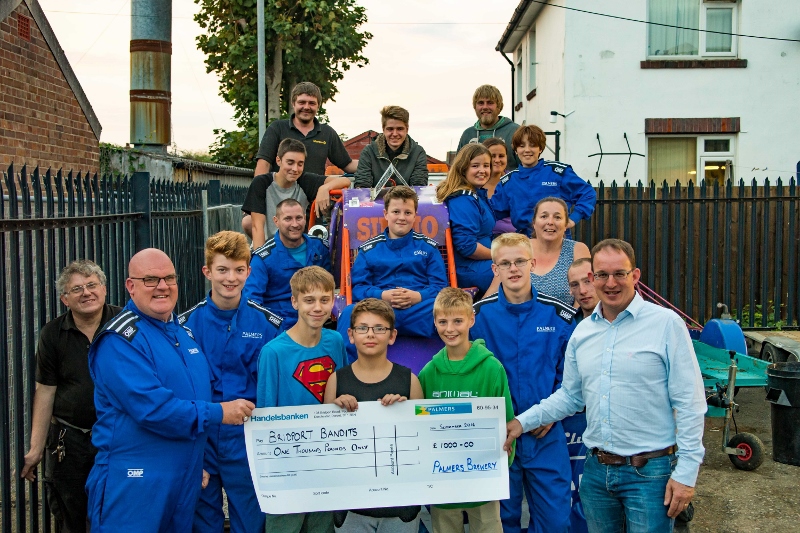 Darren Batten, Palmers Head Brewer, presented a cheque for £500 to members of the Bridport Bandits during one of the vehicle racing club’s evening sessions at the club’s garage next to the Bridport Youth Centre.

The Bandits is a voluntary organisation that has been running for 23 years. It aims to give young people in Bridport aged 11-18 a chance to gain hands on experience in a workshop and go on to race the vehicles they build and maintain.

“The club races locally at Martock but this year we hope to compete in five rounds of the UK autograss championship which is hosted by venues across the county” says Stuart McKenzie, Chair Bridport Bandits. “Palmers’ donation of £500 will enable us to represent Bridport at the Junior Autograss National Championship, a two day event at the Magor Raceway in Newport.”

“Palmers is delighted to be supporting the Bandits”, said Darren Batten “they are a brilliant volunteer led organisation that has been involved with the youth of Bridport for over two decades. Bridport Bandits is a great vehicle for young people to learn life skills and enjoy motorsport in a safe environment.

“The organisation is also an avenue for many young people to make their way into the automotive trade, over 20 previous Bandit members have gone on to work in the industry.”

The Bridport Bandits are solely a voluntary organisation that is entirely self-funded assisted by the local community. New members are always welcome. Sessions cost £2 and are held between 7pm and 9pm on Monday and Thursday evening.

The Palmers Brewery Fund was established to support local charities and initiatives. Awards are made twice a year. The deadline for applications is 1 May and 1 November. Visit palmersbrewery.com/fund for more details and application forms..