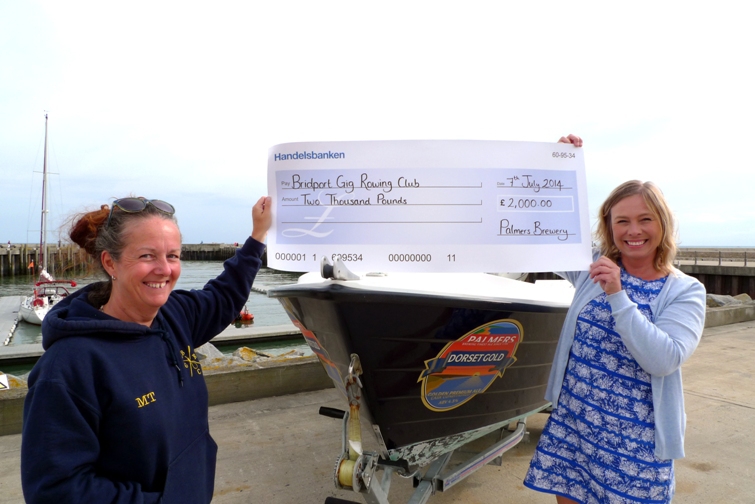 Suzanne Price, Palmers Accounts Manager, presented a cheque for £2000 to Michelle Tiffin, Bridport Rowing Gig Club Captain in front of the club’s new vessel.“The new support boat will ensure a safe environment for our increasing numbers of junior rowers” said Michelle Tiffin “and will also prove to be a valuable resource which will be used throughout the year to assist in the training of our squad rowers”.

The Bridport Gig Rowing Club is based in West Bay but also trains out of Portland harbour when the weather is less hospitable. Over 130 members participate at all levels of the sport with several squads competing and representing Bridport at regattas, fun rows and other races across the country.

Mike Carter, Bridport Gig Rowing Club Chairman added that the club “is proud to promote Palmers Dorset Gold on our new support vessel both in recognition of this award and also the valued support received from Palmers throughout the history of the club. Since 2010, Palmers has donated over £10,000 to the club.”

“I am delighted that the Palmers Brewery Fund is able to continue to support Bridport Gig Rowing Club”, said Cleeves Palmer, Palmers Sales & Marketing Director.
“As a community run project, the club is exactly the kind of enterprise that our fund was created to assist. The club enables people of all ages and levels of experience to enjoy West Dorset’s best asset, our glorious coastline.

“I am also delighted that the club’s new support vessel is promoting Dorset Gold. Dorset Gold is Palmers’ fastest growing real ale and it has a long connection with maritime pursuits in Dorset.

“Over the years contributions from the sale of Dorset Gold has enabled the brewery to raise over £30K for the Portland based Chesil Trust and it remains a firm favourite in sailing and coastal venues throughout the South of England. “I am very pleased that this association should continue with the Bridport Gig Rowing Club.”

The Bridport Gig Rowing Club meets regularly throughout the year and welcomes people of all ages, levels and experience; visit bridportgigclub.org.uk for more details.

The Palmers Brewery Fund was established to support local charities and initiatives. Awards are made twice a year. The deadline for applications is 1 May and 1 November.