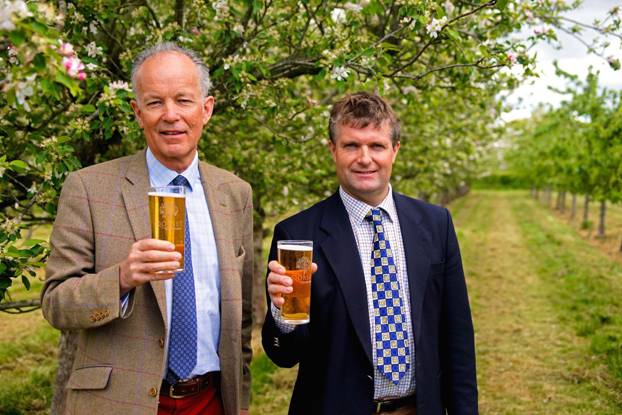 Palmers Brewery has launched an exciting new cider company called Dorset Orchards. It makes the most of the traditional varieties of cider apples grown in the county.

The cider has been created with support from David Sheppy of Sheppy’s Cider, whose family have been making traditional ciders for over 200 years.

Dorset Orchards uses only Dorset-grown apples to produce a range of premium keg and bag-in-box ciders. In April 2015 the company launched its first cider, Apple Bee. In July 2015 it is bringing out its second label, First Press.

Apple Bee (alc. 4.5% vol) is a modern, refreshing and vibrant keg cider pressed by Sheppy’s from apples sourced exclusively from orchards in Dorset.

Growth in demand for cider

This is the first time in 221 years that Palmers, who like Sheppy’s are a family firm, have been involved in cider making. Chairman John Palmer said: “Customers in our pubs appreciate quality cider and there has been an enormous growth in demand for the drink in recent years. We’re delighted to have Sheppy’s expertise in creating a premium home-grown Dorset cider.”

David Sheppy said: “Dorset Orchards is a great idea and one we’re pleased to be associated with. The Sheppy’s name is renowned among cider makers for producing quality, traditional cider.”

The apples for Apple Bee and First Press have come from orchards near Beaminster. They are a mix of classic cider apple varieties, mostly bittersweets.

Apple Bee is already available in most Palmers pubs in Dorset, Somerset and Devon and in selected free houses in the South of England. First Press will be available from the beginning of July.